The results are in…

The results are in…

As election day draws near, there is 1 question on EVERYONE’S mind… who’s gonna win? If you look online you’re sure to find a slew of predictions and poll research that all basically contradicts each other. Before we give you the results of Group Chat’s research we figured hey! why not break down what polls actually mean.

Are these things even right?

If you’re like me you probably thought Hilary had the ’16 election locked. BOY WERE WE WRONG! Not only that…guess what guys, the error in national polls were historically low in 2016. But how were all the polls off and how did America end up having an orange reality TV host as a president?

A fun little thing those in “the biz” (read: pollsters) are calling the “shy Trump voter”. Here’s how that cookie crumbles:

Polls predicted Hillary would win and they were only off by 2 points! Hillary won the popular election by 3 points in 2016 but because of the electoral college Trump wins. That’s not the whole story though. There’s 2 fun little bumps in the road that came up:

How are polls documented?

Originally, polling started as mail-in or in-person. With the introduction of new technology, the practice has evolved over time and phone call polling became popular for a long time. Now, pollsters are looking to the internet with opt-in polls but with that comes some challenges. Like the inability to source large random samples, since users have to opt-in which may skew results. Or the fact there are still populations of people who are largely off-line who behave and vote differently than the majority who are online. The challenge is to find a hybrid which is randomly selected and reflects all of the population – right now that hybrid is online and phones.

How can you tell a good poll from a bad one?

Based on Pew Research, good polls….
✅are those that are paid for and fielded by a neutral source;
✅have selected a probability-based, random sample of the public (or the population of interest, such as registered voters);
✅dial cellphones in addition to landlines;
✅make multiple attempts to reach people;
✅use live interviewers;
✅and make public both the questionnaire and a detailed methodology.

How are participants chosen?

It is supposedly completely random. Numbers are selected through random digit dialing. Here’s the thing though… have you ever met someone who was ~actually~ polled? No?

Well then, we have some GREAT news for you. One of our Kathys, Dustin Godsey gave us an inside look to being polled. Here’s our *exclusive* interview:

So, who’s winning this election?

Many polling aggregators are saying Biden will win, some in the talks of 7+ points, but here’s the thing… these aggregators are only as good as the original sources they’re pulling from. By now you’re probably asking, how accurate are those original sources? According to the Washington Post, not many pollsters are accurate. Again, tying back to the “Shy Trump voter”.

From the 2016 election, the 2 most accurate pollsters included IBD/TIPP Tracking and McClatchy/Marist, a close 3rd being the Trafalgar Group. IBD/TIPP recently reported that Biden’s camp hit a low last week, to bounce back slightly up to 49.2%, with Trump seeing a high at 44.1%… is this a repeat of 2016? We’ll have to wait to find out. In either case, IBD/TIPP, Marist and Trafalgar are showing a much different story than most of the other pollsters.

Although these polls could show the popular vote accurately, it all comes down to the electoral college and The Swing StatesTM . The whole world is watching these 8 states: 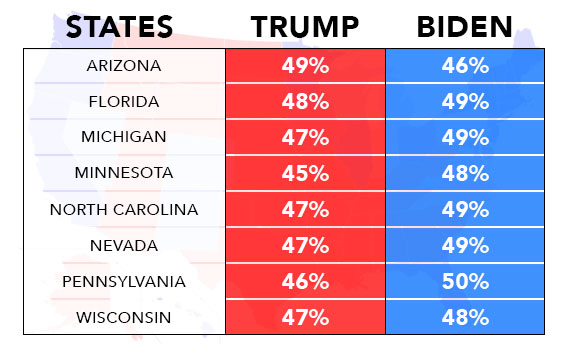 Group Chat’s got you covered.

Based on an aggregate of data from the top 3 pollsters we predict the winner will be…..BIDEN! But honestly, it’s anyone’s game at this point. 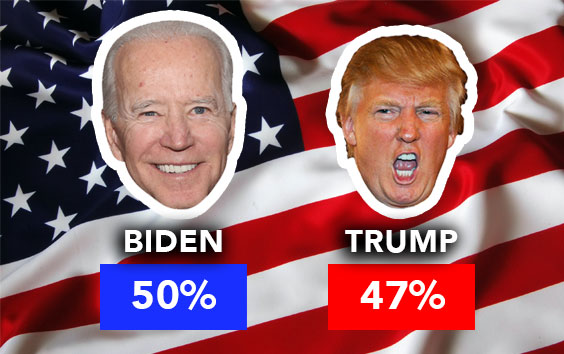 Need more info? Check out Project FiveThirtyEight they have a pretty fun and interactive site!

And in case you were wondering… yes, we did do our own poll.

We entrusted a third party to do a randomly selected poll following ALL of the best practices to find out who is the #1 podcast in the world. The results are in and might we say…we’re not surprised. 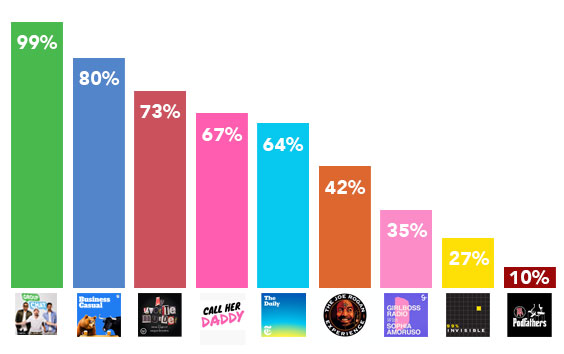 A Tribute to Alex Trebek

Get Entertained and Educated Everyday

Do you want to get educated and entertained everyday?